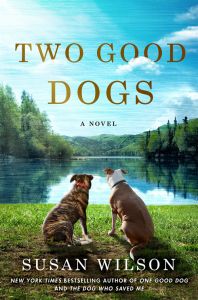 Single mom Skye Mitchell has sunk her last dime into a dream, owning the venerable, if run-down LakeView Hotel in the Berkshire Hills. It’s here where she believes she’ll give her fourteen-year-old daughter Cody a better life. But being an innkeeper is more challenging than she imagined, and Cody still manages to fall in with the wrong crowd. In addition, Cody is keeping an earth-shattering secret that she’s terrified to reveal. The once loving, open girl has now become completely withdrawn, and Skye is both desperate and helpless to reach her.

When Adam March and his pit bull Chance check into the hotel, it becomes the first of many visits. Here in these peaceful mountains he finds an unexpected relief from his recent bereavement. He and the beleaguered innkeeper form a tentative friendship. Adam knows the struggles of raising a difficult teenager and Skye understands loneliness.

And then there is Mingo, a street kid with a pitbull dog of his own. When Cody discovers an overdosed Mingo, Adam takes the boy’s dog not just for safekeeping, but to foster and then rehome. But the dog isn’t the only one who needs saving. A makeshift family begins to form as four lost people learn to trust and rely on each other, with the help of two good dogs.

The tip of the fingernail file etches a groove into the laminated surface of the school desk in a less than satisfactory way. What she really needs is a knife, something on the order of the kind that her father carried, a folding pigsticker. Something with a more meaningful edge to it. But all she’s got right now is this metal nail file she’s taken from her mother’s cosmetic bag, so she makes do.

Beneath the barrier of a cupped right hand, Cody describes the arc of haunches, a short back, then the angular thrust of a neck, the meaningful scroll of face and muzzle, curls of mane suggesting motion. Tiny forward-pointing ears. By the time she’s ready to attach legs to her creation, she’s forgotten to protect her work from the prying eyes of her history teacher and she’s snapped out of her creative trance by the wrenching of the file out of her hand, the rasp scraping the skin of her forefinger.

Cody sits back, shakes her uncombed hair out of her face, shoves her blocky glasses up on her small nose, and folds her arms across her chest in a show of perfect fourteen-year-old defiance. “It’s art.”

“It’s a detention and a trip to the principal.”

Just another day at this stupid school. Perfect.

As she slings her backpack over her shoulder, she hears the derisive giggling, the sotto voce gibes of her classmates, not a one of whom is her friend. Her friends are all back in Holyoke, enjoying their first year of high school together, without her. She’s stuck in this rural excuse for a high school.

It wasn’t supposed to be this way. When her mother announced that sheÃ¢’d put a deposit down on an old hotel, fulfilling a longtime ambition to own her own “boutique” hotel, Cody had been as excited as anyone. She envisioned inviting the girls up for the summer, swimming in an outdoor pool, maybe even horseback riding. It would be fun.

But then everything changed.

Now it felt more like she was in hiding. She knows she should be glad to be far away from what happened that day, far enough away that maybe she’s even safe, keeping her word, her exacted promise; keeping the Secret, surely safer at this distance. If he can’t find them, he can’t touch them. Her mother will never know.

It might have been all right, even though the LakeView Hotel did turn out to be a wreck, a giant money pit without even a pool, except that Cody is the butt of other kids’ laughter, the stranger who doesn’t share in their communal past. Not one friend.

Cody shoves the classroom door open, but her defiant gesture is foiled by the action of the hydraulic door closer. There’s no satisfying slam. She storms down the empty hallway, her unzipped backpack thumping against her spine. The heels of her cowboy boots clatter against the scuffed linoleum of the floor, announcing her solitary presence in that hall of shame.

A figure moves out from the shadow of the girls’ room.”Where you going” The voice is curiously deep for a girl. It’s a girl Cody knows because she’s about the only other outsider in this school. She’s a junior, but repeated failures have placed her in Cody’s freshman English class. Her real name is Melanie, but she calls herself “Black Molly.”Â To illustrate her point, Black Molly wears only black, sports a homemade haircut coaxed into something between a Mohawk and a skunk, which is saturated with shoeblack dull dye. She has oversized holes in her ears, plugged with disks. Her nails, her lips, and the tattoo on her left bicep are black. The tattoo riding her thick arm is unidentifiable; it might be a skull and crossbones or a sunflower, and probably the work of some amateur under the influence of crack. Black Molly might be thought of as a Goth, but Cody knows better. There were plenty of Goth girls in her old school, all black lipstick and eyeliner-rimmed eyes, but there’s nothing romantically medieval about Black Molly’s appearance. If anything, she looks like the love child of a Hell’s Angel and a dominatrix. With the disposition of both. Cody’s heard the kids making fun of Black Molly behind her back. No one would be stupid enough to say anything to her face. Black Molly is tough. She’s the kind of kid that will think nothing of ripping your arm off and beating you with it. The jokes are best made when the girls’ room door shuts behind her.

“None of your business.” It’s a poor riposte, but the best Cody can come up with. Black Molly may be intimidating to everyone else, but Cody holds her ground. She’s already mad at the world, so why not get physical? Why not unleash the boiling anger onto this creature of the night?